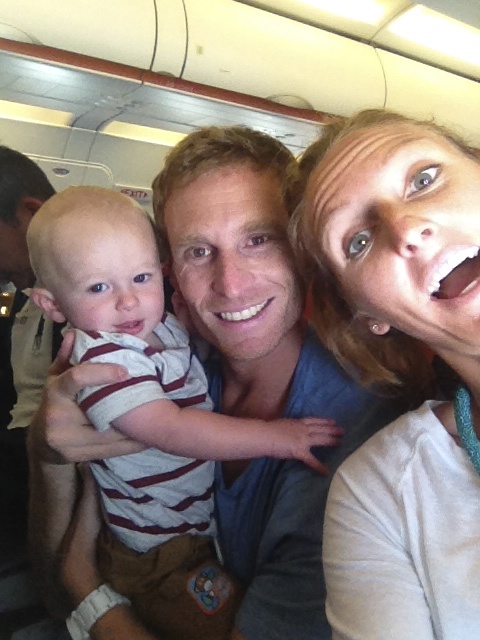 We’ve flown with Ethan four times in his 20months so far and have two more trips booked (but only one of which he’ll be on our laps, yay).  Those of you with active kiddies under the age of two (they can have their own seat once they turn two, otherwise they’re on your lap), will know that even the shortest flights are not easy.  They are all over you unable to get comfortable and the last place they want to be is on your lap, even when tired.  They want to run up and down the aisle (or crawl if they’re not walking yet), jump on the seats, stand on the seats, open and close the window visor, put the tray table up and down, you name it, they want to get involved.  We certainly haven’t mastered the flying with the child on our laps situ and I’m not sure we ever will, but here are a few tips that may help if you’re thinking of venturing abroad:

1. Calpol.  A dose of Calpol as soon as you get on the plane.  This worked when he was under a year, after that it does nothing, apart from potentially giving them a sugar hit. NB be prepared to take abuse from other women, ‘Oh, you’re cheating are you’.  No, I’m trying to make the flight more relaxing for everyone!

2. What ever works.  E.g. If milk shuts them up then load up.  Its good for taking off and landing as well so they can pop their little ears and prevent pain, and therefore screaming.

3. Toys.  Take as many quiet toys as you can.  I say quiet as your neighbours won’t appreciate loud annoying toys and neither will you two hours in, you’ll be looking for the parachutes.

4. Pashmina.  This can be used as a blanket if they should sparko out.  You can also put it between you to build up a level so that the little one can sleep across the two of you with the arm rest up.

5. Kindle / Magazines.  Forget these.  I have taken them on all eight flights and I have yet to put them to use.  So use the extra space in your carry on for more toys, or colouring in books, milk, vodka.

6. Supplies.  My mum told me this as she got stuck somewhere with me and my brother when we were small as we flew back and forth across the pond a fair bit…(I don’t know how she did it with two kids under four, she needs a medal)… take a couple of change of clothes and enough nappies for a couple of days.  And extra food.  You never know where you might get stranded or delayed.

7. Fingers crossed.  By any stroke of luck you will have a spare seat next to you so once you’re airborne you can spread out and give your toddler his/her very own seat!  This makes everything much much easier as they want their own space.

8. Be prepared to not get a moments peace.  Gone are the days when you can sit back, relax and sleep / chill / eat / read / chat on a flight.

9. We take the buggy to the gate as its easier to rush around with the little one because their legs are little and can’t walk as fast as you.  They also get distracted and a 5min walk can turn into a 30min walk.  However, leave enough time to let them run around to expel as much energy as possible rather than doing so on the plane.

2 thoughts on “Flying with a toddler”

Professional wakeboarder and Level 3 Coach from the UK. Surfer. Traveller. Health & fitness. Wanderer. Wife. Mother of two very adventurous little boys. Wine.
😂😂 “Gone surfing” 😂😂 .#iwish #iamsolandlocked #thegardenshed . . . . @mysticboarding Tee @watersportsworlduk #sp #mysticboarding
I’ll be in my garden, not catching my flight today. ✈️ We were due to head to Miami, then Naples, Orlando and then back to Miami with the fam over the next couple of weeks... but at least the sun is shining in England ☀️ #stayhome . . @mysticboarding // @watersportsworlduk #mysticboarding #sp
There’s going to be a whole lotta posts featuring my garden shed over the next couple of months. 🤷‍♀️ . Tee from @mysticboarding // @watersportsworlduk . . . #sp #mysticboarding #breakboundaries
I’ve left the house 3 times in the last 16 days... should I be slightly worried that I am not bothered by this? w/ coffee . . . . . @mizulife #gifted #mizulife #sp #coffee #butfirstcoffee #walks #hikes
When will the next adventure happen 🗺🤷‍♀️ . . @mizulife #mizulife #leavenothingbehind #gifted #sp
Cheers to the start of summer time ☕️ . . . . @mizulife #mizulife #gifted #sp
Update: Nearly done with quarantine! Aaaaannnnddd now we’re in lockdown. So the most asked question I got over the past couple of weeks is: do you think you’ve actually got it? And also: it’s probably just a cold. The answer is, I’m not sure and also, it’s not a cold 🤧 I’ve had a mild cough, a small temp, aches, a stabbing pain in my left side, and injuries hurting that haven’t hurt for years. But I’m on the mend a just feel a bit weak now. My household have also been coughing and the kids had small temps, but they seem to be ok now too. Hopefully because we’ve been at home, we haven’t passed it on to anyone else. And thanks to Mumma bear, as she has kindly been delivering food on our doorstep for us 🙌🏻 . #stayhome #unrelatedwakeboardphoto
Why I won’t be jumping in this weekend 😫 We’ve been in household isolation this past week because I’ve had very mild symptoms. It started with a ‘I feel like I’m getting sick’ throat, then a cough, then a small temp, then body aches and some dizziness. I felt embarrassed about having to lock us down. It’s now spread throughout the household. We might have very mild symptoms & because we’ve stayed home & rested we’re on the mend. I might have felt very silly in doing this because, after all, we’re not even sure if we’ve got the virus that shall not be named... but at least we’ve reduced the risk of passing on to those who are at higher risk than ourselves. 🦠 Only a week of household quarantine to go.... 🤦‍♀️ #wellbeinlockdownwhenwevefinished #willweeverknowifwevehadit #thankgodwevegotagarden
That was a really fun ride 🙌🏻 It was the season opener at @xtreme_wake and their park was on point. My forearms still need work 🙄🤦‍♀️ #forearmswereonfire