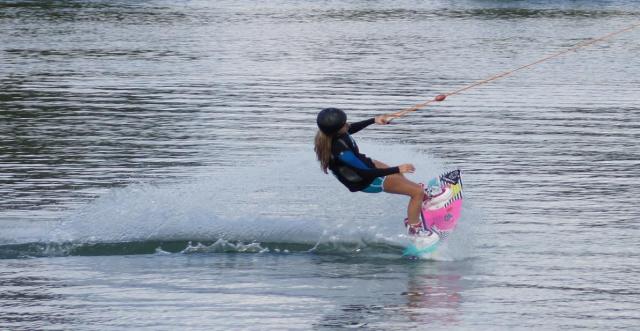 THAT comp came round very fast this year.  For me, the UK Cable Wakeboard Nationals is the biggest competition that I do in the wakeboarding calendar.  It is also the comp that brings along the most amount of nerves. Ever. I’m pretty much nervous from the British Trials in April for this comp.

This year, it was held at the beautiful set up which is WMSki near Cirencester.  The lake is clean and weed free, the toys are substantial and the cable has a nice pull to it.  They have a cafe/bar which kept me going all day, great camping facilities for the event and a friendly and helpful team.

All riders who weren’t there on the Friday had to be there for the riders briefing at 7am on Saturday morning which meant a 5am start for me trekking from London – and of course not forgetting the standard vanilla latte and blueberry muffin stop half way.

As the comp kicked off the sun came out to play and the Daisy Dukes could be rocked which made me happy.  They seemed to get through the qualifiers for the other categories really quickly and next up was the Open Ladies being called to the dock, aahhh!  I was first out, which I hate more that peas, and I fell on an inside backroll on my first lap, doh!  As I was in last place, I had to head out first again for my second lap, luckily I landed the backroll, stuck a switch 360 and sliders and rode away.  The qualifiers were good from the ladies, everyone was pushing it and really styling it out on the sliders.

After some more sunbathing, some burgers and a snooze, it was time for the finals.  This time I wasn’t out first!  I put in an ok lap with a switch 360, inside backroll, boned out rooftop, gapped A-frame but then fell on the last toy which was weird as its a flat bar??  By this point I sadly didn’t have enough point for a podium finish, so I had to do something.  My second lap out I landed the 360 then went in for a backroll before corner 4.  Those of you who know me will know that this is a massive deal for me as I have NEVER landed an invert (let alone in switch) before corner 4.  I was kinda shocked that I’d landed it and came around for an inside backroll but due to the cut I had too much slack on the line and fell in after landing it, gutted.  However, this was the first time I have ever been able to do two inverts in a comp run, so that was a new personal best for me, stoooooked!!

Overall, even though this was my worst result (6th), it was the best Nationals I have been to because it was the largest the Open Ladies category has ever been.  There were nine entered but eight rode.  Seven out of the eight girls were inverting and everyone was really styling it out on the sliders, it was brilliant to see!  I felt like it was the first time that anything could happen as everyone was good and everyone fell on at least one of their laps during the day… It was great to see the ladies stepping it up and progressing the sport in a positive way.

Thanks to everyone who made it happen! 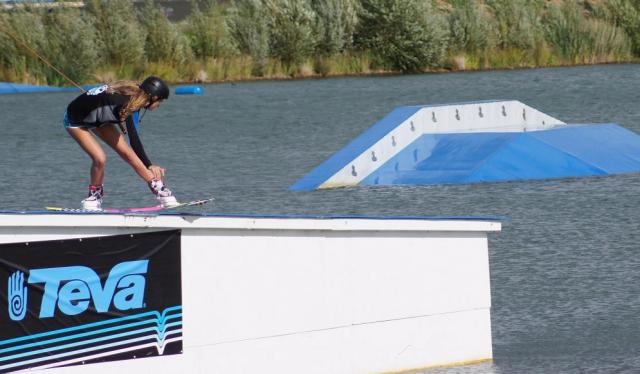 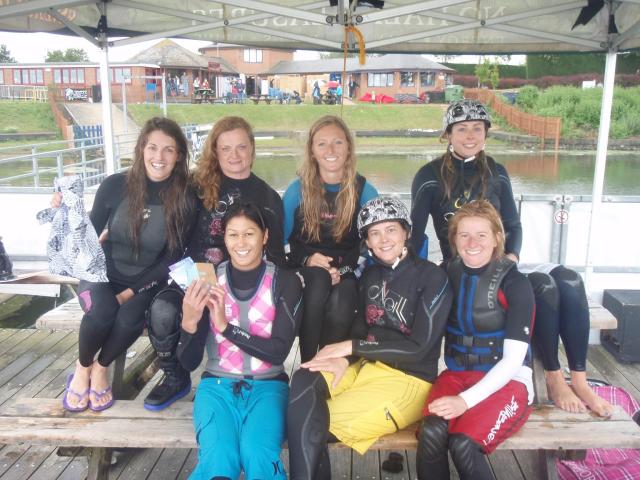 Ok so I know I go on about the weather but I spend most of my time outside so I can’t help it!  When Sarah and I rocked up for the chicks sesh on Sunday, it was miserable… the rain was pelting down which was just not cool.  However, when the weather sucks that much, you get the girls turn up who absolutely love wakeboarding and will shred no matter what! Its even more fun because everyone there is just so stoked 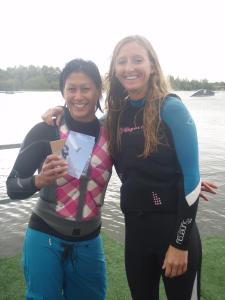 to get on the water, we love it!

We only had a handfull of girls but they were giving it some.  We had a new girl called Steph join in who had never been on a cable before, she managed to get up and to the first corner for the first time!  She went away with the Wide-A-Wake goodie bag.  We were able to pull out the kicker infront of the dock and Anne, Olena and Rosie were trying new tricks and landing that.  We also got some double-ups going which Kyle and Chloe were filming from the boat, we had lots of fun with that!  The Nalu Beads and Two Seasons Prizes went to Sharm who landed a switch scarecrow for the first time!! Her first kicker invert, well done Sharm!! 🙂

The morning was so much fun.  Thanks to those who got out of bed with the weather looking that miserable and got involved regardless, you girls really do make it!  The next one will be on Sunday 21st August at WakeMK. 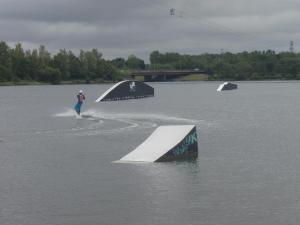 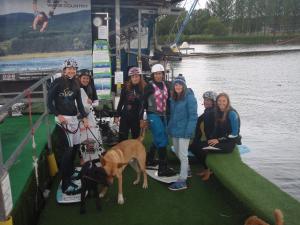 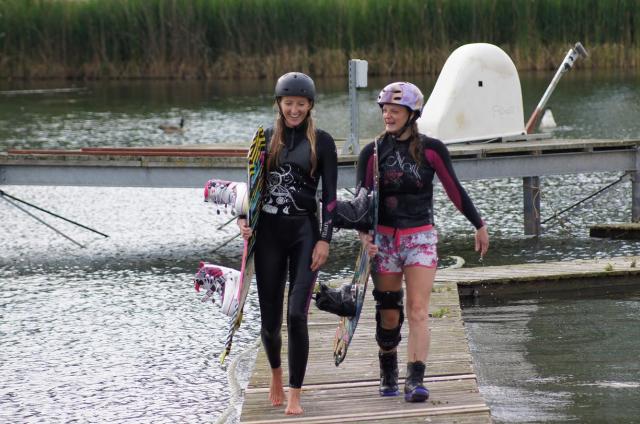 I nearly didn’t make it up to the third stop of the Ten Feet High series due to the M1 being so bad with all the rain, however, I got up there to find a flat lake.  As the day went on the weather improved loads, dare I say it was even warmish?  The comp kicked off with the Rookies followed by the Ladies.  All the girls were throwing down their inverts and going big!  Great to see.  Inbetween the Wakeskaters and Intermediates there was a display from the world champion freestyle Jet-Skiier, crazy to watch!  He would go round in a circle to create his own double-up and then use it as a ramp while opening the throttle to do some sort of flip.  Then the Pro Men headed out for their comp leaving the judges with a tough decision. 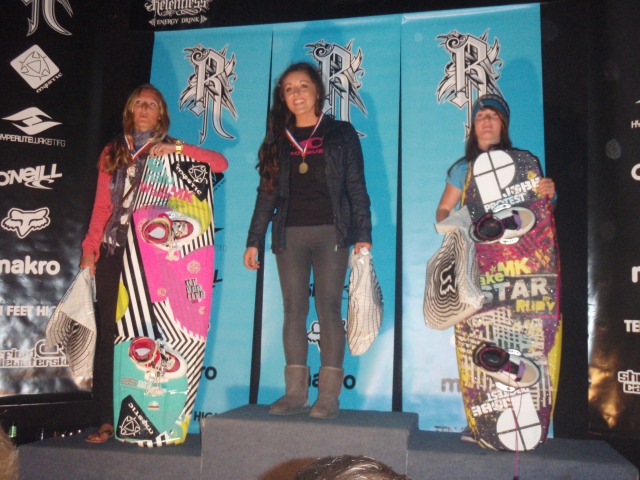 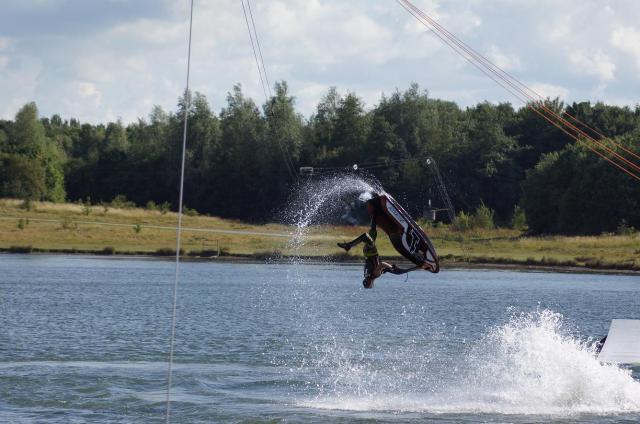 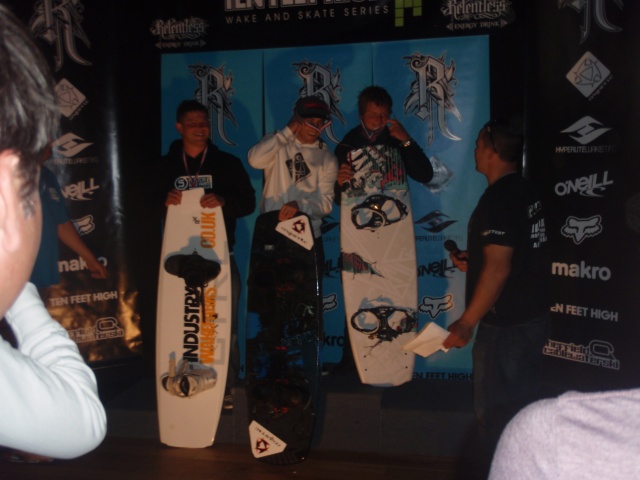