I didn’t actually do anything to do with the Jubilee celebrations this weekend (I tried to catch it on the telly box when I could though).  I was at WakeMK on Saturday for the Syndicate Mag Hot Spot shoot, which turned out to be quite a hectic afternoon.  One of our members took a turn for the worse on the dock.  However, (massive) thanks to the WakeMK Team, the Paramedics and Doctor Jen, we are glad to hear he is doing well.  We hope to see him back up and shredding soon. 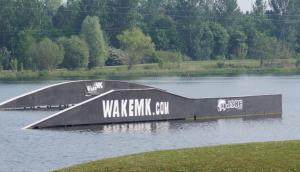 On Monday evening the edges of the lake got pretty busy as crowds gathered to watch the Big Air comp.  The Am’s kicked off with people throwing all sorts!  The girls got to ride in this as well, Mystic Rider Laura Christian, and WhiteNoSugar’s newest Rider, Sarah Kingdom.  The girls did well and threw it down.

Then the Pro’s went out to see what they could do.  I had a great view as I was one of the judges, right in the action.  We had huge tricks coming from the boys.  Mystic’s Cain Hamilton landed a massive TS FS 900, this was rivalled by Lewis Cornwall landing a smooth HS BS 720 who came 3rd.  In 2nd place we had James Young who laid down a tasty Moby Dick.  And finally, in 1st place we had World Champion Nick Davies who stomped a TS 1080 right in front of the huge crowd, who went wild!!

Great weekend and thanks to Watersports World for making it happen 🙂